In its second year the 2014 Arctic Race of Norway, organized by Tour de France owner ASO, showcased the beauty of Norway and gave credence to the Scandinavian country’s growing cycling culture. The event was shot for Peloton by Norwegian photographer Kåre Dehlie Thorstad, who shared his insights with the magazine. 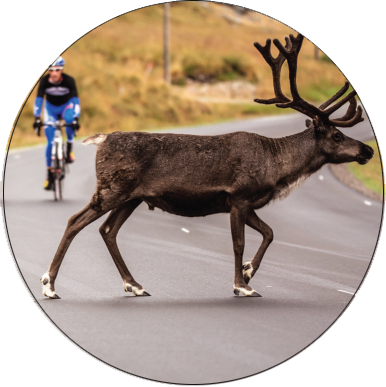 What is it like covering a race in your home country?

Obviously, there is no language barrier, so getting around is easier than in Spain, Italy or France. Norway is a large country but has a rather small population [ just over 5 million] concentrated in the cities in the south. Once you get out of Tromsø, the largest city north of the Arctic Circle with a population of approximately 70,000, there are not many people around—but everyone seems to be involved in one way or another, either as a volunteer with the race organization, as a spectator or working with something related to the race. Cycling and cycling culture is not the most familiar of sports that far north, but the people are well accustomed to joining forces in order to make things happen. That’s part of the heritage up there, I think, and they put their pride in delivering a good show.

The landscapes seem to be a huge part of the race. Can you tell us about the beauty of Norway?

Norway is definitely a beautiful country; we can boast of one of the world’s most amazing encounters with nature. Fjords, rugged coastlines, sandy beaches, high mountains and waterfalls—Norway has it all. Once out of the major cities, you’ll find a relaxed pace and an alternative to the hustle of daily life. In many ways, I think the Arctic Race is a celebration of the beauty (and brutality) of Norway, pushing the limits even further for the second edition, and sending professional riders all the way up to the North Cape—the utmost end of Europe.

There were so many faces and people in your images from Norway. Will you describe some of the places, people, locations that stick with you?

Well, people are part of a bike race, making it happen, either as riders, organizers or spectators. During a stage race you come across quite a few people, everyone with a different story to tell. When documenting a race, I like to look at the whole picture, not just the racing action. There is so much enthusiasm, so much passion on every level worth capturing. I will definitely not forget the old Sami [one of the 70,000 indigenous Laplanders that live in the Arctic area of Sápmi, which today encompasses parts of Norway, Sweden, Finland and Russia] I encountered on my way to the finish atop Kvænangsfjellet, sitting in an old chair, cutting pieces of dried reindeer meat with this huge knife. I asked him if it was okay if I could take a photo but got only a nod as reply!

Is there a different feeling for you shooting a race at home versus in France, Spain and other places?

You would probably think it’s much easier doing the Arctic Race of Norway compared to the Tour de France, but every race has its character and challenges. As there is only one single road going from Tromsø up to the North Cape, it’s impossible to “cut” roads as we normally do during races—taking alternative routes to pass the peloton and take photos during the race. The logistics of the race definitely reduces the number of opportunities, so you have to be really focused at all times.

Will you describe the cycling scene in Norway and what you saw covering the race?

Norway has come a long way in just a few years. There are 16,000 licensed cyclists, seven UCI Continental teams and three highly categorized stage races (Tour of Norway, Tour des Fjords and Arctic Race of Norway). Everyone has heard of Thor Hushovd and Edvald Boasson Hagen, but we’ve got a new generation coming. Norway probably has one of the strongest teams at the [under-23s’] Tour de l’Avenir. What’s missing is a Norwegian or a Scandinavian ProContinental team. The economy is good in this part of Europe, but it’s maybe too early for a major sponsor to take the step into cycling. The sport is quite new here compared to cross-country skiing, for example, so there is still a long way to go.

Any memorable moments from this year’s race that stick in your memory?

There are so many to choose from, actually, but getting up to the North Cape was magic—being witness to a historic finish at the very outpost of Europe! Feeling the wind and rain coming in from the Arctic Ocean, freezing, and thinking of the riders battling it out against the harsh conditions and each other. It must have been quite spectacular for the riders!