If your love for the beauty of bicycles transitions into other mechanical masterpieces, you may well have an affinity toward fine watches. If so you have probably heard of Bremont watches, some of the finest timepieces produced in England today. Now, Great Britain may not rival Switzerland for its storied history in timepieces, but since 2002 Bremont has built a strong reputation for its highend pilot and diving watches.

Founded by Nick and Giles English, Bremont watches take their inspiration from the brothers’ love of historical airplanes and their passion for all things mechanical—passions handed down to them by their father Euan, a former RAF pilot who was tragically killed when his vintage World War II airplane crashed in a training run for an airshow in 1995. Nick himself was badly injured in the crash, but survived, and eventually decided to pursue another of their father’s passions, that of fine luxury watches.

It may surprise you to know that watchmaking is actually a very British trade; since the 17th century, many innovations that have led to the modern-day wristwatch actually came out of England. Much is owed to Thomas Tompion (1639-1713), known as the “Father of English Clockmaking” and Thomas Mudge (1715-1794), who invented the lever escapement still used in most watches today. And numerous other innovations like the balance spring, the second hand and automatic winding are also English innovations.

And with this history in mind, the English brothers set out to celebrate their country’s fine watchmaking tradition with Bremont watches; all of their watches are designed and manufactured at or around their headquarters in Henley-on-Thames, just west of London. Hand built in limited numbers, Bremont watches take pride in their precision and reliability.

We recently tested the classy Supermarine with its highly visible white face and its Bremont-tailored NATO-style strap with distinctive James Bond-like stripes. The Supermarine is a function-based watch with an understated eye on form. It comes as no surprise that Bremont ambassador and Nepalese climber Nirmil “Nims” Purja (above) has chosen the Supermarine on his travels around the world in an effort to become the first person ever to climb the world’s 14 highest peaks (all over 8,000 meters) in just seven months. The previous attempt took more than seven years, but Purja already holds the current world record for climbing three 8,000-meter peaks in less than 48 hours. On his journey he sports the S300 White Supermarine. 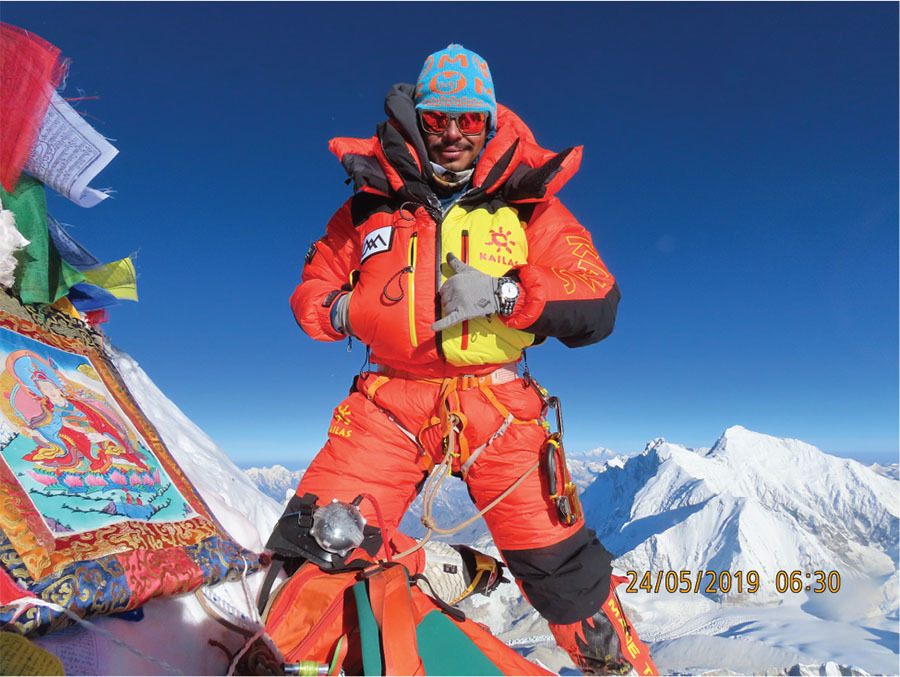 Like all Bremont watches, the Supermarine offers chronometer-tested accuracy of between -4 seconds to +6 seconds per day while its sapphire crystal boasts nine layers of anti-reflective treatment, which makes them harder and more scratch resistant.

The Bremont Supermarine range is instantly noticeable with its black finish on its lower casing, which houses a unique helium escape valve, a spring-loaded, single-direction valve that is activated when the difference between the inner and outer pressures reaches a critical level that allows for the release of gases trapped in the watchcase. Such attention to detail and high levels of design precision is further facilitated by Bremont’s connections to the automobile racing industry, another tradition in British mechanical engineering led by Jaguar and McLaren. But while Bremont prides itself on its English heritage, its name comes from across the Channel in France, and is the result of a chance encounter with a French farmer named Antoine Bremont. Back in the 1990s the brothers were forced to make an emergency landing while flying over the French countryside in their beloved 1930s biplane. Bremont took them in and they soon discovered that they shared a passion for timepieces, as his home was filled with clocks. A longstanding friendship soon formed and years later, as they pined for an original name for their new company, they found it only fitting to name it after Antoine, their ami français.

This story originally appeared in issue 90.

Also check out Taking Argon 18 To The Tour