When, in 2018, I opened a wine shop in Washington, D.C., I decided to name the business Domestique. Why? Well, the term “domestique” essentially means servant in French, and central to that is the idea of service. Most of us in the wine trade have a service background. You get into this business to provide a service for someone else. And cycling domestiques are the quintessential servants—something I learned after watching the 2013 Tour de France.

On stage 18 to L’Alpe d’Huez, Richie Porte was escorting his team leader Chris Froome up the famed alpine climb when Froome bonked and then held on for dear life. Over the final few kilometers, Porte dropped back to the team car to get calories for his sputtering general. They both received penalties for the late snack but Froome held on to Porte’s wheel and cut his losses on challenger Nairo Quintana. Porte’s actions stuck with me (despite the pair’s bad blood many years later). There’s something incredible about the labor that one person will take on to ensure the success of another with aligned goals.

At Domestique, we think of the vignerons as our team leaders, the Chris Froomes. Their talent for farming, reading nature and knowing the science and art of turning grapes into something ethereal is what leads to greatness. I wanted to create a business that served to elevate vignerons—French winemakers—and help them get their wine, often made in miniscule quantities (and through backbreaking labor), in front of people. 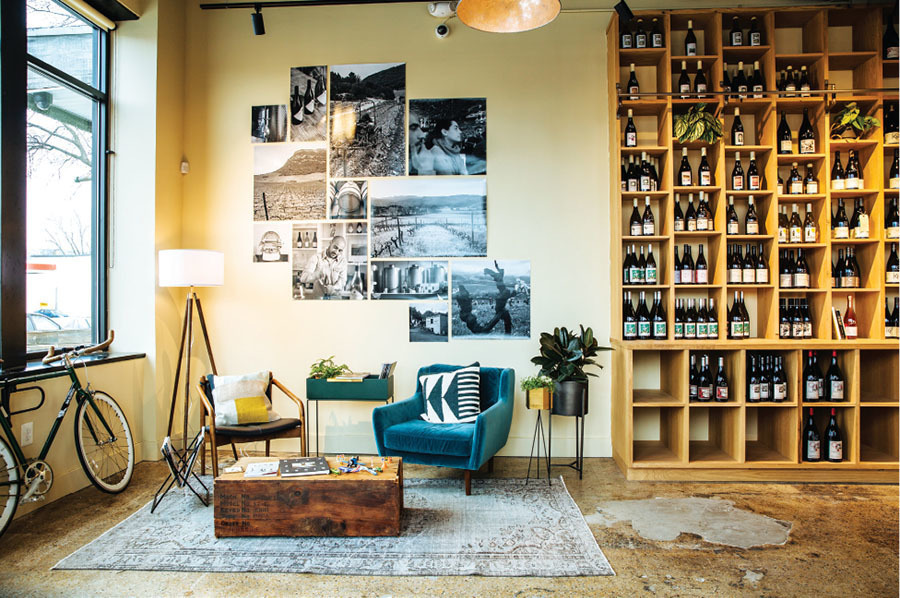 Our focus is natural wine. That’s a trendy, highly nebulous term these days. To us, it means wine that is farmed organically or biodynamically, fermented with native/indigenous yeast, and made with minimal (if any) amounts of added sulfites. These are the wines that I’ve always loved.

They’re expressive, they’re made by people and they’re better for the planet.

The idea for Domestique was to be an unambiguously French brand—and one directly connected to French cycling. Our primary colors are the yellow of the maillot jaune (and roadside sunflowers!) and the green of the maillot vert. Most of our employees ride to work, and so bicycles are a constant companion in the shop. And since day one we’ve been hunting for a bike that would be the “shop bike,” one to be displayed above the tasting bar for all to see. But it has to be a French bike and should be yellow. Although we’ve seen some nice René Herse machines, we have yet to find the bike that’s just right.

For the design of the brick-and-mortar store, I worked with my father-in-law Michael Heming, a New York-based architect who’s also an avid cyclist and rides in the steep hills of Connecticut’s Litchfield County. Our goal was a design that reflected our roots. Michael wanted to mirror our focus on younger, more cutting-edge producers by avoiding the intimidating dark wood, library-like look traditionally associated with wine storage and display. We also stayed away from synthetic and highly polished surfaces and instead went for natural materials that would gracefully age with use: unfinished wood, raw metal, existing distressed concrete.

We have a sitting area by the front window that looks like a living room, designed by D.C.-based design firm Studio Miel, which plays on our name even further—it’s not just Domestique, but also domestic, because customers will be bringing the wines home with them.

In wanting to pay tribute to the production process, Michael designed a display of black-and-white photos of our vignerons and the places where they grow their grapes and make them into wine. The pictures are arranged in random rectangular paving patterns that are typical of the country roads of France. Looking at them and their geometric randomness, with their muted tones and focused intensity, feels transportive. That’s how the entire shop is intended to feel.

I often think about how the wine we sell so closely intersects with the world of cycling. When you ride bikes on the beautiful roads of France, Italy, Spain or elsewhere, including California, you spend a lot of time riding through and by vineyards. You see the people putting in the grunt work that’s required to support the $350 billion wine industry. The types of wines that we love and sell are an infinitesimally small part of that figure; but they often come from the far-flung places where land is cheap, exciting stage race days happen and old people ride bikes alongside tractors and horses.

The place that I travel to most often for work is France’s Loire Valley. It’s the home and vibrant epicenter of natural wine. It’s one of my favorite places in the world. And whenever I’m there, I inevitably end up staying in some giant, dilapidated farmhouse with eight other wine people in the middle of nowhere on the edge of a one-street farming village. On these trips, I’ll always see groups of local cyclists riding by in the late morning. They’re usually not going particularly fast and they’re certainly not wearing Rapha gear or riding the latest carbon frames. They’re all headed somewhere—and they’re all domestiques in one way or another. And there’s something incredibly beautiful about their effort that grabs me. That’s what I’ve tried to reflect in Domestique.

From issue 95, get your copy here.