American team manager Jim Ochowicz is nothing less than a true pioneer in the sport of pro cycling. Back before globalization was a catch phrase in the sport, he entered the first U.S. team in the Tour de France in 1986. Against all odds, the 7-Eleven team’s Canadian rider Alex Stieda managed to grab the yellow jersey on the second day of the race and house sprinter Davis Phinney scored a stage win the following day. And a year later, when the Tour started in West Berlin, the squad came away with three more stage victories. Ochowicz, who today is the general manager of the CCC Pro Team, has earned a reputation as one of the hardest-working managers in the sport, visiting his different squads at most races throughout the year. We caught up with him before the 2019 Tour de France to look back at his team’s pioneering efforts and what they have taught him over the years.

Jim, you have managed pro teams for decades now, but in 1986 you made history by bringing the first American squad to the Tour. What do you remember most when you think back to the start of the 1986 Tour? Well, we started in Paris that year with a prologue time trial on the Fourth of July—and we were the first American team ever invited to the Tour. Next day, there was a morning road stage and an afternoon team time trial. In addition, there were 10-man teams at the time and we had almost all Americans with the exception of Canadian Alex Stieda and Mexican Raúl Alcalá. It was really pretty amazing, because we were pretty much a group of amateurs. There were a couple of guys that had pro experience, Alexi Grewal and Doug Shapiro, but really most of the guys had been amateurs racing in the U.S. just one year before. In 1985, we were invited to do the Giro d’Italia, but other than that we were all neo-pros.

It was really crazy. I mean, we only got invited 10 days before the race! We had to get new clothing made with a couple of new sponsors that came on board and we scrambled like hell to get bikes ready, to get wheels ready, you name it! I remember I only got the clothing for the race two days before. I actually had to go to Descente, our clothing supplier, in Switzerland. I helped with some of the design and printing and then drove it to Paris just in time, hoping of course that everything would fit the riders. And it did…but there were a lot of close calls!

Well, call it beginner’s luck or whatever you like, but you got off to a great start when Alex Stieda, who was 21st in the prologue at 12 seconds, grabbed the yellow jersey in the next day’s morning stage! Yeah, I remember Alex lined up for that morning’s stage wearing a skinsuit and everybody was like, “Hey, what are you doing?” But Alex just figured that the stage was short [85 kilometers] and that there was no real reason to carry food. He pretty much soloed all day and even though he got caught by six others in the end, he had already managed to pick up enough bonus seconds to grab the yellow jersey. Actually, he also took the points jersey, the green jersey and the combined jersey. He picked up four jerseys that day!

Wow, that was just stunning. You guys must have been on cloud nine! Yeah, but then we had the team time trial that afternoon and we had never done a team time trial before! Some of the guys had done four-man TTTs at the world championships or the Olympic Games, but it was definitely the first time we had done one with more than four people. Wow, that was a surprise! We crashed, lost six minutes and, of course, lost the jersey. Fortunately nobody got injured!

When you look back at that very first Tour do you sometimes pinch yourself ? I mean, looking back on it today it was pretty unreal, and really unimaginable in the sport today. Oh yeah, it was a wild moment in my life and I think it was a wild moment for all of the staff and riders that were there with us. And it is still something we get together and talk about occasionally, because it was just so unique.

Did you get the sense at the time that you were somehow pioneers to a whole new generation of cyclists? No, not really. We knew that we were the first American team to do this, but it didn’t feel like we were pioneers. Now, looking back, yes in some ways we were. But at the moment, no, we did not know to what extent we were pioneers. We didn’t know that half of us would still be in the game today in some way, shape or form. Back then, we didn’t even know if we would be invited back the next year. We didn’t know what the future held. 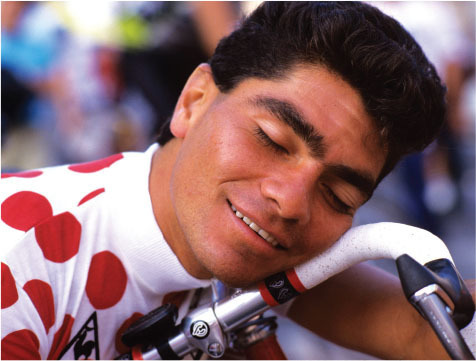 Well, you were indeed invited back the next year. The learning curve had obviously been steep but the team was quickly developing into a world-class operation. While the team was a bit of a curiosity only one year earlier, you confirmed a lot of expectations in 1987, winning no less than three stages. Yeah, 1986 was an unknown from start to finish. But by 1987 we had already gotten our first Giro d’Italia and Tour de France under our belt and we had done a lot better preparation in 1987 because, after 1986, we knew what the challenges were. In 1986, we got third to last in the team time trial. In 1987 we got top 10, plus we won three stages and the white jersey with Raúl Alcalá. It was a huge jump for us, and it said a lot for us as a young team for the future.

Were the Tour de France organizers supportive of you and your team at the time? They’ve always been very supportive, even today.

Do you think that the sport can continue to grow internationally? Or do you think that the globalization has reached a plateau of sorts? I think it is going to continue. I don’t think it has even started to touch on the global wealth, the global organizations that can come into this sport. But we’re limited to a calendar that has 52 weeks in a year. So you can’t race 100 weekends around the world. We have to stay within a reasonable calendar where the teams and players can provide entertainment.

Was there ever a point in the last four decades when you looked back and said, Wow, this is really a different sport than it was? Not in one day or night, no. It’s been a gradual change.

Jim, you’ve been managing top-flight teams for decades. Are there any lessons learned from those first Tours that you still come in handy today? Well, when it comes to the Tour de France, it is race where you have to take risks and chances, and it is a race that pays dividends to those that do just that. Alex showed us that on stage one when he jumped broke away and grabbed the yellow jersey. And Davis Phinney showed us that the next day when he jumped into a breakaway and then won the stage. From then on we started winning stages on a regular basis, and we still do today.

do you miss the most about the sport you knew in the 1980s and what do you enjoy the most in the sport today? I miss the guys and gals from the 7-Eleven group. They all were a big part of history and our history. And I feel the same way about our CCC group today. We work together and we live together, and we do the best we can do. That’s what I like most.

This article originally appeared in issue 87