Like the Galibier or the Finestre, the Col de Tende could have been a monument of the Alps. One climb that, by itself, can seal the result of a Tour or the Giro. Ideally located at the border between France and Italy, the Tende is a strategic pass linking Nice in the south to Cuneo and Turin to the north. It’s in a very remote area between the wild Mercantour range and the gentler peaks of Piedmont.

On the French side, the climb is really long to the 1,871 meters (6,135 feet) summit. It runs from the Mediterranean coast up the Roya valley for 70 kilometers. An eternity! And it has a terrible crescendo across a truly steep mountainside. While the north side has a more classical topography, the south side presented a true test of civil engineering to the road builders in centuries past. It took no less than 46 consecutive switchbacks to scale the 600 meters (2,000 vertical feet) of the final slope in 7 endless kilometers. For the record, this segment could make the Alpe d’Huez climb and its 21 hairpins in 14 kilometers look like a gentle hill. 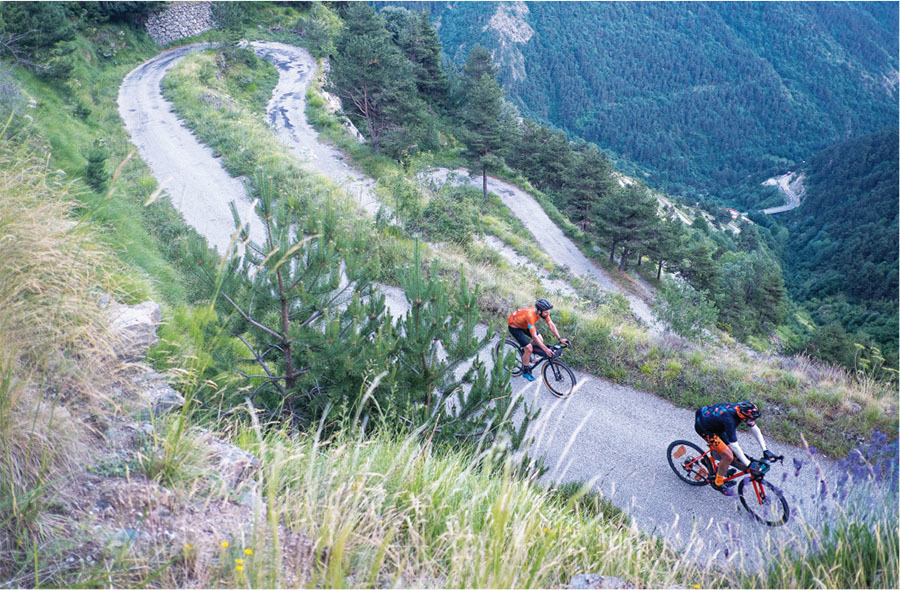 With this spectacular geography, its unusual elevation directly from the sea and an average slope of 8 percent, everything was there to make the Col de Tende a grand tour legend. Its only fault was history, and the first major road tunnel constructed in the Alps, that prevented it from being paved and accessing cycling glory.

When we began the climb, we admired the imposing geography of the Tende above us. But we ignored most of its remarkable history. Tende was the main challenge of our day, our passage to Italy and what we hoped would be a welldeserved meal and bed. It was also the pretext and highlight of our four-day bikepacking adventure.

A setting sun put us under some pressure. We couldn’t climb any faster, but we could at least continue climbing at the same pace. The eventuality of a long and dark downhill ride to Limone, the first town in Italy, increased just as the chance of finding an open ristorante got thinner and thinner. The road climbed steadily—it’s now an unmaintained, rocky double track. It’s difficult to imagine the time when thousands of horses and mules rode upon this very same trail, stumbled on the same rocks and probably suffered much more than we did.

This forgotten pathway was once part of a major commercial road dating from Roman times: the Via del Sale (“the salt road”). It was used to carry sea salt from the Mediterranean to northern Italy and beyond. Over time, the border was often moved, but the traffic never ceased to increase, including stagecoaches and mules—a lot of mules. Toll registers tell us that during the 18th century, this pass saw a record annual flow of 46,000 mules!

But the road was also a strategic nightmare. Because it was so difficult to maintain, so difficult to navigate and covered with snow for up to five months a year, it also gave rise to one of the first great road tunnels of the Alps. This gigantic project was first attempted in 1614 under the reign of Charles-Emmanuel I, the Duc de Savoie. But it took almost three centuries before the goal was realized. And in 1882, after four years of drilling and building, the Tunnel de Tende became a reality. It was one of the first alpine road tunnels and, at the time, the world’s longest at 3,182 meters (almost 2 miles).

Its success made way for the drilling of a second tunnel, this one for the railway, in 1898. With two tunnels, the climb to the pass would eventually become obsolete, long before the automotive boom and the paving of the great passes. After World War II, General de Gaulle had the new French-Italian border moved some meters below the crest line, to prevent the location becoming a strategic military point.

Since then, the Col de Tende has been a quieter scene, mostly inhabited by sheep and wolves. The infamous 46 hairpins are not used by anyone but a few shepherds. Nevertheless, history never ceases. The road on the Italian side has been paved to develop the Limone ski resort…and, at last, gravel is something important again.

“THIS PASS IS ONLY FOCUSED ON YOU AND YOUR TEMPO IN ONE OF THE MOST PRISTINE LANDSCAPES OF THE ALPS, AND THE SILENCE THAT COMES WITH IT.”

Without asphalt, the Col de Tende has a new opportunity for notoriety within the cycling community. With the obligatory use of wider tires, it is as challenging as its neighboring mountain passes but even more appealing because of the lack of traffic. You’ll not see here any motorcycles or camping cars, nor a refreshment stand at the summit. This pass is only focused on you and your tempo in one of the most pristine landscapes of the Alps, and the silence that comes with it. When we reached the remote summit with the last rays of sunshine, a feeling of great achievement came over us. The Tende was not an easy climb. There’s no doubt the crossing is worse than it was back in the day, and the 8 percent feels far steeper than it would on a smoother surface. In return, I have never felt the same emotion on reaching the top of a great pass.

With no audience, we soberly celebrated the rugged ascent. Our hope to find an Italian pizza had definitively gone, but the emotion was overwhelming. We just put on our jackets and vanished into the darkness. The Col de Tende is a legendary climb with a wild landscape and its gravel gives you what paved roads simply cannot provide: absolute serenity.