If a box containing a quart-sized plastic bag of neatly packaged 30-gram baggies of white powder arrived on your desk, you’d be forgiven for thinking a canine at the U.S. Postal Service fell asleep on the job. Or that there might soon be a knock on the door from some unsavory-looking figures searching for a missing package.

Luckily, I was expecting this shipment from Mike Fogarty, CEO of the nutrition company First Endurance. When he asked me a couple of weeks earlier if I wanted to take part in updating the brand’s EFS and EFS-PRO hydration mixes, I jumped at the chance. As an editor, I’m usually on the other side of product development, telling people what I like and don’t like in reviews—without being able to do much, if anything, to change the product. Getting to play sponsored athlete and see my feedback immediately incorporated into a product was a rare opportunity I wasn’t going to pass up. 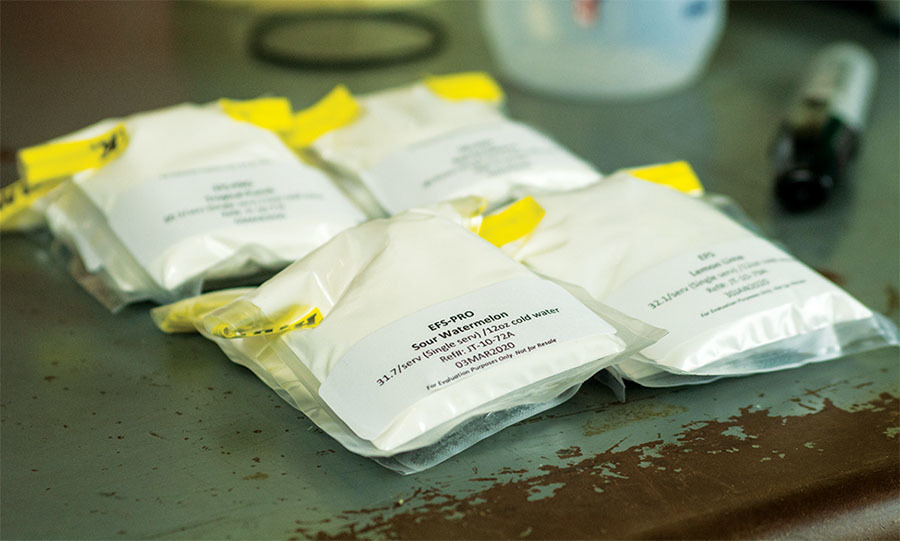 Fogarty provided four sets of prototypes to test, each affixed with a utilitarian label listing its batch number (a jumble of letters, numbers and dashes) as well as product type and flavor: EFS-PRO Kiwi Strawberry, EFS-PRO Tropical Punch, EFS-PRO Sour Watermelon and EFS Lemon Lime. Alongside the prototype mixes, Fogarty included a letter instructing me how to use them (without other food or drinks on a one- to two-hour ride) and how I should record feedback, including things to think about and look for, like taste, odor and mixability. I was also supposed to record perceived energy level with a scale ranging from “had more energy” to “felt like crap.”

I first tried Kiwi Strawberry, drinking one serving half an hour before riding as instructed and saving the other for my 90-minute ride. Maybe it was a placebo effect, or the fact that I’d been working from home for a week, but just before rolling out I felt full of energy and ready to go. I also felt the mix was a bit too sweet. On the bike, the sweetness only became more apparent—but I felt really strong. Over the following week, I tried the other three samples and dutifully recorded my feedback, determined to be of some use during this process. On the whole, while testing, my energy level was great, but the mix tasted too sweet.

Soon, I took an in-depth survey online, spending far too long lingering over questions, consulting my notes and second-guessing my original thoughts before ultimately providing what I hoped was useful feedback.

First Endurance sources feedback from a wide-ranging group of athletes. I was one of 40 different endurance athletes, about a 60/40 split of men and women, including cyclists, runners and swimmers, involved in this test. Each of us lives in different parts of the country, providing valuable differences in training conditions like temperature and humidity.

I soon talked to Fogarty on the phone to review my answers, something he does with all the athletes involved to make sure no feedback is lost in the process—especially with the number of variables present in a drink mix. There was good news (at least for me): the other athletes—high-level cyclists and triathletes, mind you—had similar feedback to mine. Maybe I’m not half bad at this! First Endurance was happy with the results and felt like it was on the right track. Fogarty told me this was an extremely successful first round.

At this point, Fogarty put me in contact with Dr. Luke Bucci, chief scientific officer at First Endurance, who had been consulting for First Endurance and joined full-time earlier this year. His CV is impressive, a nearly margin-less list of degrees, authored papers and other accomplishments from his more-than-three-decade career working with supplements and nutrition. He has even served as an expert advisor on nutritional supplements for the United States Olympic Committee.

Dr. Bucci hasn’t been involved in the entire development of these new mixes, but he told me that he’d been impressed with the scientific expertise he’d seen in First Endurance’s products. He said that for the second round they had reduced the sweetener and added some masking carbohydrates. They’d also added an ingredient that is somewhat bitter, so they tried different flavors to mask that. Ingredients in flavoring agents, he told me, are very carefully guarded by their manufacturers, making the flavoring aspect of development a tricky process compared to getting the performance of the mix right.

When the second round of mixes arrived, I repeated the testing process, once again taking detailed notes. This time around the sweetness level had improved to the point where I would be happy to use either mix on a normal basis. That was where I diverged a little from the other testers, many of whom still thought the mix was a tad sweet.

But I wasn’t too worried about my opinion being out of step anymore. After talking with Fogarty and Dr. Bucci, I learned that taste and sweetness are incredibly subjective categories, even changing culturally. Fogarty said that when First Endurance worked with European teams in the past, their riders’ palate had been noticeably different from that of Americans. He also said there are some pro athletes who don’t care about how things taste, only that they are getting the highest level of performance possible. But taste is important to the average consumer (me included, probably you as well), so the product has to be something most people want to buy.

Based on that athlete feedback, there is going to be another round of testing, mainly dialing back the sweetness a tiny bit more. If all goes perfectly and the athletes have no more feedback, there will then be a prototype run with a larger group receiving the samples at a discounted rate. This step is crucial; it’s one thing to test with pro athletes, but it’s another to see how high-level amateurs, the majority of people who will be buying these products, react.

If all goes to plan, the new mixes could be available to buy as early as August—but only if they’re ready. First Endurance has no plans to rush anything, preferring to get the performance and taste just right. When these mixes do finally come out, just know that a lot of expertise (and quite a bit of tasting!) went into making and testing them.

From issue 95, get your copy here.