Completely overhauling a beloved frame is a difficult decision to make. Miss the mark on recreating the outgoing frame’s ride quality and people will no doubt be unhappy. So, whatever those changes are, they must be compelling. For Cannondale, improved aerodynamics on the SuperSix Evo—incorporating some of the lessons learned creating its aero SystemSix—was that compelling reason to drastically alter its trusted race bike.

Gone are the rounded tubes, replaced by truncated airfoil shapes that, at a similar weight and stiffness, reduce drag by 30 percent. To save precious watts, the new aero-shaped seatstays have been lowered; the HollowGram SAVE SystemBar aero handlebars and stem, which include an integrated computer mount, are integrated into the front end for cleaner lines; and the cables are fully routed through the bars and stem, visible only briefly as they exit at the brakes and derailleurs. By keeping components in house, including wheels, bars, seat post and stem, Cannondale gained more control in optimizing every part into the frame and tuning the bike how it wants.

Now, many of these features are nothing new. Cannondale is playing catch up to other competitors that have been adding similar design elements to their lightweight race bikes for years. But being fashionably late to the show isn’t always a bad thing. Cannondale thinks it has done the aero climbing bike concept better than the rest, and it has numbers to boot. 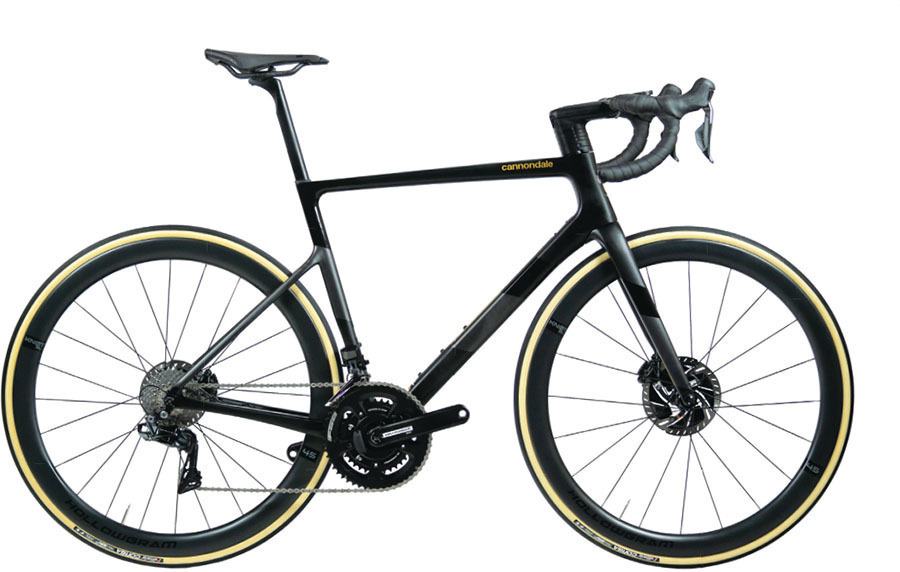 Its wind-tunnel testing shows less drag than similar lightweight race bikes like the S-Works Tarmac and BMC Roadmachine across yaw angles encompassing 95 percent of riding conditions. The savings are significant, too: 9 watts less drag than the S-Works Tarmac at 30 mph, and more than 30 watts compared to the previous SuperSix Evo. Cannondale’s KNØT 45 wheels, set up with Vittoria Corsa 25C tires, also save a couple of watts compared to the similar-depth Zipp 303s in similar testing. Those claims are quite impressive. As an added bonus, the front wheel comes with an integrated sensor, for more accurate speed and distance data, that also keeps track of needed maintenance—when to replace tires, chains, etcetera. And the wheels are equipped with Mavic’s slick Speed Release through-axles, something we would like to see on more bikes.

So it’s certainly faster than the previous version, but what about maintaining its predecessor’s ride quality? By using truncated tube shapes, Cannondale was able to maintain similar stiffness and weight properties to the old rounded tubes, while gaining aero benefits. And even though it has slightly higher stack and less reach than the aero SystemSix—it falls right in the middle between that bike and the endurance-oriented Synapse—it’s still very much a race bike.

Weight has been shaved wherever possible. The KNØT27 seat post takes off 35 grams compared with Cannondale’s 25.4 SAVE seat post, while the internal seat-post clamp drops another 13 grams. A size 54 disc frame comes in at 847 grams, painted and with small parts like hardware. The integrated fork, which is specific to each frame size and has clearance for up to 30C tires, adds another 379 grams. Overall, the new SuperSix remains very competitive on the scales with other lightweight race bikes.

The one head scratcher on this bike is that the included power meter requires shelling out $490 to activate, after already dropping nearly $12,000 on the bike. Cannondale introduced this same pay-to-unlock model on the SystemSix, and we’re still sorry for any shop employee who has to give that detail to a customer.

Sometimes you jump on a bike for the first time and it just feels right. When you test all sorts of bikes, that doesn’t happen every time. But clipping into the new SuperSix Evo, knowing you’re about to have a proper bit of fun, you can’t help but crack a sly smile. Like someone with a firm handshake, this bike delivers a quality first impression—and it only gets better as the miles tick by.

Tuned down just enough versus super twitchy climbing bikes, you immediately feel, well, not much. It’s a super smooth, almost floating-like sensation. Coupled with freehubs that are quieter than a properly tuned Dura-Ace Di2 drivetrain, it’s practically silent, save for the familiar hum of aero equipment slicing through the air.

On an infamously bone-jarring stretch of road, we hardly felt any rattling through the saddle. Chattering from the road is still present, but it’s like Cannondale found a knob that controls bumpiness and ratcheted it from 11 down to 3. Meanwhile, our top-of-the-line, stiff-as-hell carbon-soled shoes were transferring every bump through our feet. The thin profile HollowGram SAVE SystemBar, which can be interchanged and adjusted by 8 degrees of pitch (a nice feature lacking in one-piece bar/stem combos), does a nice job of soaking up road chatter, as does the KNØT 27 seat post. The difference in feel between the handlebar and saddle contact points versus the pedals attests to the work this frame is doing. And that ride was with tires inflated to 100 psi, without setting up the wheels tubeless; if desired, there could be even more plushness added to this bike with tubeless 30C tires at 80 psi.

But despite taking much of the harshness out of the road, this bike somehow still offers a responsive ride. It lacks the twitchiness associated with traditional climbing bikes, but it’s not lethargic. Cannondale has happened upon a nice balance here that many riders will appreciate.

Pure climbers may long for a slightly twitchier bike that encourages dancing out of the pedals on the steepest grades. This bike feels slightly more upright and is more of a seated climber that encourages a consistent cadence. The vast majority of people will likely find themselves better served in more situations by the ride characteristics of this Cannondale than by a twitchier bike.

On shallow-grade climbs below 5 percent, the new SuperSix thrives. That is where the aerodynamics can really assist the low weight in maintaining speed, allowing you to demolish PRs. It’s the kind of speed where you might feel like you are slowing up, but then look down and realize that you’re still pushing 20 mph—uphill.

On flats, it feels like you’ve uncovered a fifth gear in your car…and then a sixth, and a seventh. It just keeps responding, accelerating from 30 mph with the same feel as it does from 25 mph and 20 mph. Many bikes start to respond differently as speed increases. The SuperSix Evo, however, silently goads you to push harder. No power input feels wasted. But like pure climbers, sprinters with a wicked kick may want a slightly stiffer bike that can make snappier, split-second moves in a bunch sprint.

This review originally appeared in issue 88.