Ask any bike rider what first comes to mind when they hear the name “Pioneer” and you’ll likely get answers like “power meter,” “dual-leg power” or maybe “HD metrics.” Ask anyone else and you’ll probably get an answer related to high-end audio equipment. But even those two disparate categories only touch the surface of what Pioneer produces. Founded in 1938 in Tokyo, Pioneer began as a radio-and-speaker repair shop and has grown into one of the most innovative and inventive brands in the world. Pioneer played a key role in the invention of the stereo, laser disc, automotive compact disc players, GPS auto navigation, plasma displays…the list goes on and on.

What does any of this have to do with power meters and bike riding? If you drill down into what Pioneer actually does—creates electronics that transfer complex data in very demanding situations and then present that data in a compelling and useful way—the bicycle power meter makes perfect sense. In fact, Pioneer is likely the ideal company to make one…and it all started with a man named Ryujiro Fujita.

One look at Fujita-san and you can tell he can climb. He’s slim and lithe, with the vascular build of a man who puts in serious saddle time. Ten years ago, Fujita-san began riding with his co-workers and using the power meters available at the time. “My boss and co-workers were having fun riding road bikes and I started training with them,” remembers Fujita-san, currently the product planning manager for Pioneer Cycle-Sport. “At that time, we were using other companies’ products. However, it was not sufficient in terms of waterproofness, accuracy and so on. I started thinking that if we can make the product by ourselves, it must be better than those. That was the beginning.”

While most of us riding power meters 10 years ago were still in mystified awe seeing a wattage number on our head unit—and paid handsomely for the privilege—it took someone like Fujita-san, with the knowledge of what was possible, to realize it could be done better. Even so, to create the power meter he visualized was no easy task, even with all of Pioneer’s expertise.

“At first, I assumed that we could make it in a short time. But it actually took five years! I was planning on creating a power meter with good features and an affordable price. On the way, the idea to visualize pedaling was proposed. The first prototype models came out quickly, but to make it a final product was significantly difficult. We struggled with waterproofness, battery life and to maintain the accuracy in any situation, etcetera,” says Fujita-san of the early years.

The Pioneer team took one of its prototypes to Asada-san, the Japanese national team coach, for proof of concept and it was Asada-san who asked: “Is it possible to make pedaling visible?” That was a key moment. Pioneer’s new product went from just another power meter to an actual pedaling monitor. 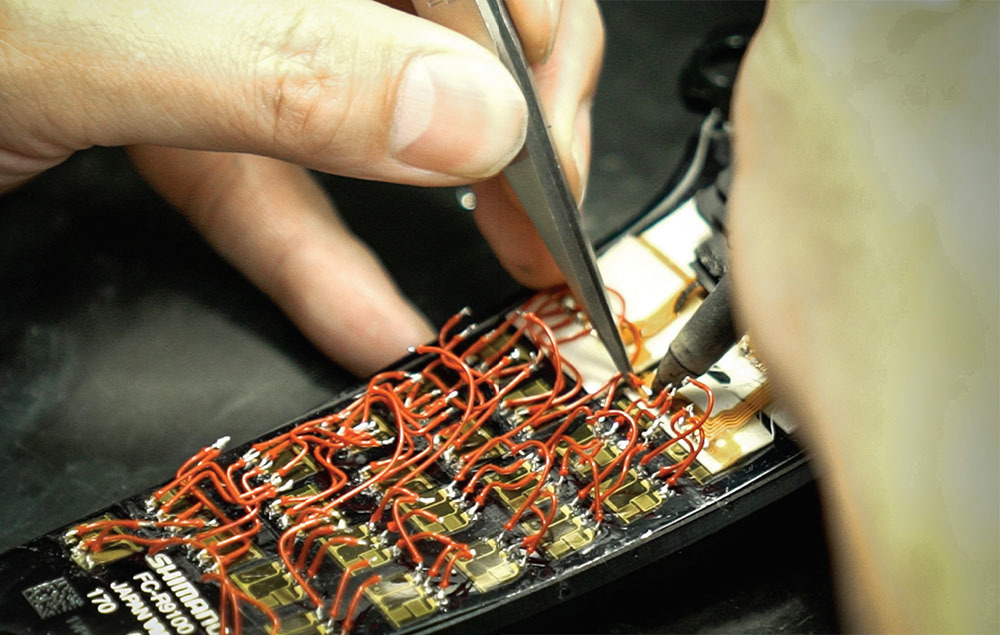 “Thanks to his advice, we devoted ourselves to the development of visualizing pedaling. It was different from a normal power meter. It was monitoring the pedaling vector at 12 points, monitoring rotation angle and the force of both tangent and flow line. We placed the utmost importance on the accuracy of monitoring these,” says Fujita-san, explaining the birth of HD Metrics, which can be seen with Pioneer’s own head units and now on Wahoo’s ELEMNT units.

Once word reached Europe that Pioneer had created a system that went beyond simple power measurement, there was immediate interest.

“Soon after we started to display the prototype model on some exhibitions, a professional team abroad contacted us and they wanted to use our product. We rushed out to them bringing with us the latest prototype model. When they actually used it, due to continuing harsh conditions, the prototype was broken very quickly and the accuracy was not up to their expectations,” Fujita-san says.

Akio Fukushima, the manger of Pioneer Cycle-Sport’s engineering section had mixed emotions as the early prototypes reached European pros. “We were so happy that professionals wanted to use our prototypes, but we were nervous at the same time. Actually, their comments for improvement far outweighed the nervous feelings. It kept us on our toes when they tested our products. Eventually, it made our products far better and they were happy with our products. It was a good challenge for us. Now, they use our products and we get good feedback. It is rare to hear our products ever break.”

Fukushima-san is exhibiting textbook Japanese modesty here. Pioneer’s teams have enjoyed enormous success with their power meters. One of the first major victories was Lars Boom’s Tour de France stage win in 2014 over Roubaix cobblestones in apocalyptic conditions. This year, Lotto-JumboNL enjoyed its best season ever with Pioneer, thanks to big wins by Dylan Groenewegen, Primož Roglič and young American Sepp Kuss.

When asked if he is proud to play a part in these victories, Fukushima-san responds with more humility: “I feel more relieved than proud!” Spoken like a true engineer.

Pioneer’s corporate slogan is “sound.vision.soul.” We’d like to suggest a new slogan for its Cycle-Sport division: “sound.vision.soul & power.” The power meter may seem an unlikely product for a Japanese multi-national corporation famous for changing the digital-entertainment world. But thanks to men like Ryujiro Fujita and Akio Fukushima recognizing that Pioneer’s expertise was ideal for the power-meter world, we’re all able to dissect our pedal strokes in a way never before possible and get up that hill a bit quicker. Perhaps not as fast as Fujita-san but, thanks to Pioneer, we’re always improving.

From issue 81, get back issues here.

Experience more cycling and outdoor content with the Active Pass!